On the morning of October 9, 2014, the livestock carrier vessel Ocean Drover experienced an onboard fire at the Port of Fremantle. It was reported that 50 crew members were taken to hospital for treatment, and no animals were on the ship at the time. 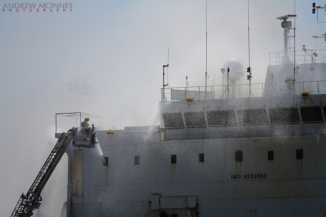 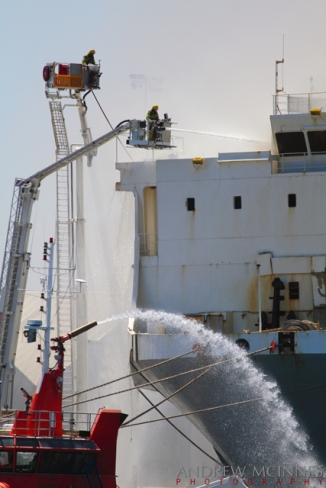 I hope you enjoy these images of a portion of my recent travel up the Western Australia coast. 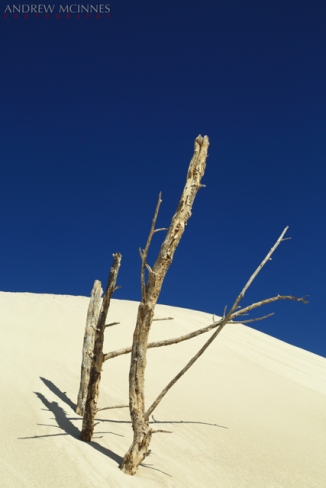 Stark and simple – dunes and a stunningly blue autumn sky engulf me (and a coastal tree). © 2014 Andrew McInnes. 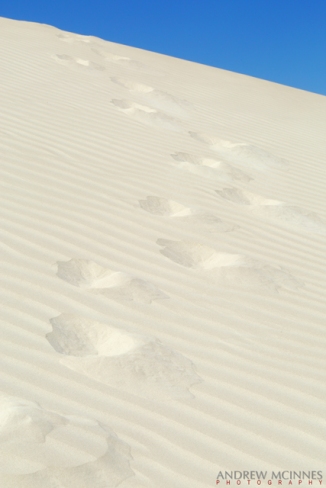 Footprints among the sand. © 2014 Andrew McInnes. 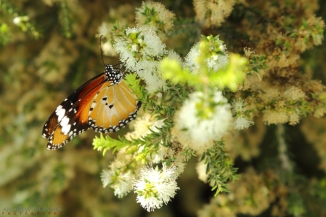 This is the third, and final, post covering my recent trip to Malaysia. As it was not a photography or vacation trip, I took one camera with one lens – no tripod, flash, etc. Consequently, all of these images are handheld or rested on objects, and all are taken essentially as ‘snapshots’ throughout the day/night and with whatever light was available, not targeted light. All images were captured with Canon 7D and Canon 24-105mm f/4L lens. Taking images with a slow shutter speed on a moving ship is certainly challenging 🙂

All images are Copyright © Andrew McInnes/2AM Photography. All rights reserved. 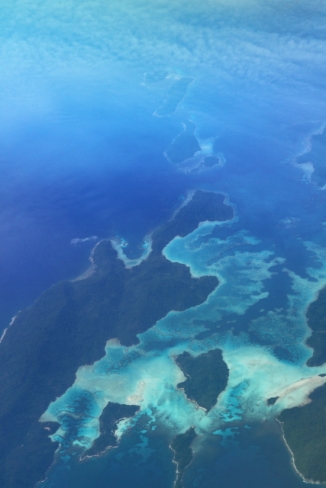 South China Sea 2AM-116929
Clouds and some of the unidentified islands (to me at least) of the South China Sea, photographed through the plane’s window somewhere between Kuala Lumpur (on the Malaysian peninsular) and Labuan Island (just off Malaysian Borneo). 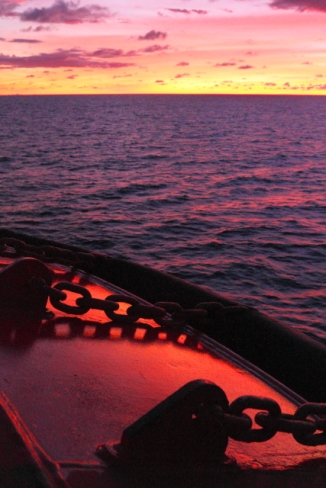 South China Sea 2AM-117315
More from the bow of the ship – a spectacular sunset.

So long Malaysia, you are lovely and diverse, as are your people.

This is the second of three posts covering my recent trip to Malaysia. As it was not a photography or vacation trip, I took one camera with one lens – no tripod, flash, etc. Consequently, the great majority of these images are handheld, and all are taken essentially as ‘snapshots’ throughout the day/night and with whatever light was available, not targeted light. All images were captured with Canon 7D and Canon 24-105mm f/4L lens.

Labuan is one of three Federal Territories of Malaysia and is an island off Malaysian Borneo. This photo-blog will include some scenes from Labuan and some from nearby islands (island = Pulau).

All images are Copyright © Andrew McInnes/2AM Photography. All rights reserved. 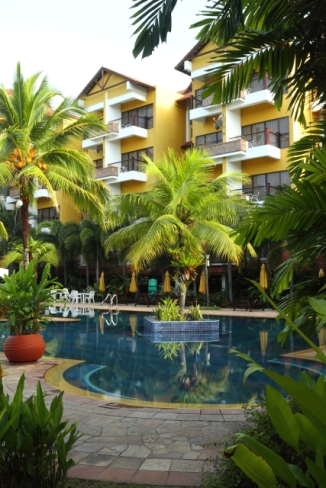 Water Village – Labuan 2AM-116956
This is one of the “water villages” on Labuan Island, Malaysia. At high tide the water comes within about one foot of the floors of these homes. The people in this village were lovely, friendly, and apparently content with their lot in life – perhaps those of us with so-called ‘first-world problems’ could learn some lessons from these fine folks. This scene reminded me of areas in Papua New Guinea, where I was raised.

As my purpose for this trip was marine related, i.e. working offshore on vessels, there are several images of boats and dry-dock…

Labuan 2AM-117376
A storm and rainbow over a large assemblage of seismic vessels in Labuan Harbor.

Fishing Boat – Labuan 2AM-117064
A few local trawler vessels preparing for departure. I loved the character of the hulls of these boats.

Labuan Shipyard 2AM-117092
Scaffolding surrounds a ship that is dry-docked (photographed at night). 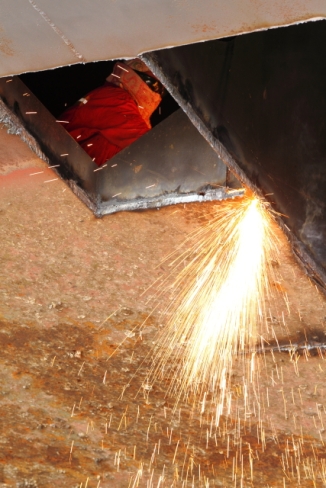 Labuan Shipyard 2AM-117154
A worker inside a dry-docked barge uses an oxy acetylene torch to cut out great plates of compromised steel that are part of the hull of this barge. 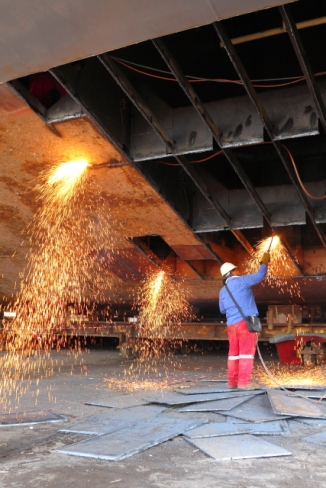 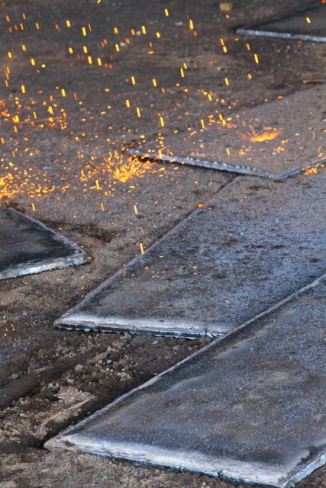 Labuan Shipyard 2AM-117166
Sparks rain down onto the great plates of steel as other plates are being cut out.

Water taxis were abundant and necessary for those, like me, who work on vessels.

Labuan has an active bazaar which was both bustling and fascinating. All manner of goods and services are available including electronic repairs, jewelry, food, tailors, fashion, cobblers, etc. 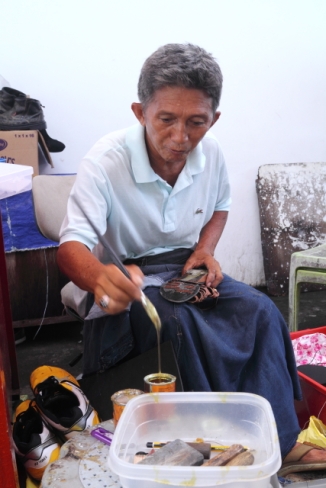 Cobbler – Labuan 2AM-117069
This shoe repairman was amazingly efficient with his workmanship, and a very pleasant fellow. 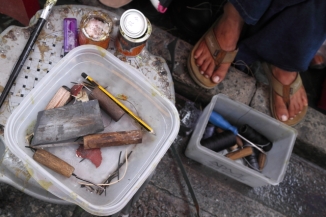 Cobbler – Labuan 2AM-117074
Some of this cobbler’s tools of the trade – all manually applied instruments.

Bazaar – Labuan 2AM-117080
A vendor watches a shopper stroll through a portion of the bazaar.

Arrrg! Almost without exception, whatever body of water I may be on, this is what I see, to varying extents (and this is only the visible stuff – I cannot imagine how much chemical contaminants are present). These images, though from Malaysian waters, are not endemic to this place. 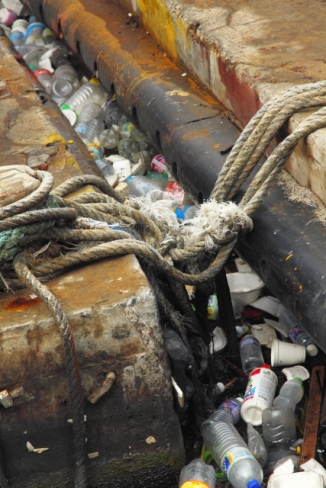 As there were several days of downtime awaiting the arrival of the vessel which was the vehicle for my work, several of us – Australian, German, French, American – hired a local boat owner to take us to a few off the nearby islands.  These places, though offshore, are not exempt from marine pollution.

More scenics from Pulau Rusukan Kecil, this time sans trash. A thoroughly delightful and complex group of little islands, all very proximal to each other. 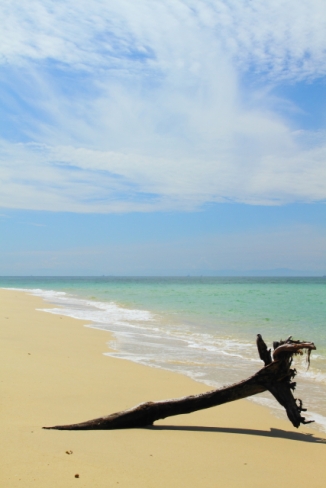 Pulau Rusukan Kecil – Malaysia 2AM-117014
A lovely sense of isolation on this island’s beaches. 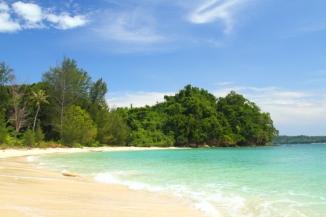 This next island is designated as a marine park – a “no-take, no damage” island and surrounding waters.

Pulau Kuraman – Malaysia 2AM-116984
The red vessel is the one we adventured with. A lovely place for a swim/snorkel.

The following four images are from Pulau Daat, an island with a village populated by Philippine fishermen and their families. The colors were so vivid – almost startling – so much so that I was keenly wanting to explore and visit with the residents.

Pulau Daat – Malaysia 2AM-117038
A sampling of the colorful little fishing boats. The fishermen take these little, and highly unstable, motorized vessels offshore to fish – you might notice the outriggers that they troll their lines/lures off. 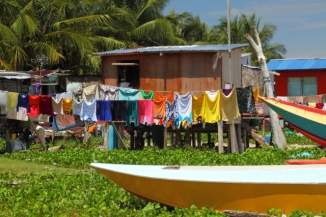 Pulau Daat – Malaysia 2AM-117044
I was fortunate to spend time visiting with some of the folks whereby verbal communication was challenging due to language barriers. One thing I already knew from my various travels was reinforced though… a smile goes a million miles in human interactions. What started as a chat with the four men (photo-front), soon became a delightful visit with over 2 dozen folks, most of which were children – once they “got their courage up.”

Pond Cleaning Man – Labuan 2AM-116954
A worker harvest plants from a freshwater pond at the WWII Memorial.

As my last location before I departed Malaysia was at a dock in Labuan, I’ll close this post with a few images from there.

Labuan Shipyard 2AM-117392
Mid afternoon a storm began building and I was hopeful there might just be some amazing light as dusk approached. I was not disappointed by the storm or the color!

Hopefully you experienced some of the sights, sounds, and scents , if vicariously, through these images.

I sure appreciate you visiting.

Ah Fremantle, what a place you are! The following images are an eclectic assortment including fireworks, beach, doorways, plants, a square-rigged ship, an abandoned power-generation station, and graffiti.

Hope you enjoy a non-encompassing glimpse of “Freo.”

Fremantle Fishing Boat Harbour – the fishing boat fleet are out of frame to the left.

The ferris wheel in Fremantle’s Esplanade Park (also in the photo above). 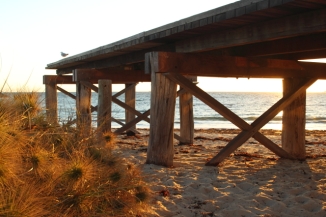 A beach immediately south of Fremantle – the Indian Ocean was very tranquil that day.

This fine ship is the STS Leeuwin II (sail training ship) whose home-berth is Fremantle.

I had the great privilege and pleasure to sail onboard her as an officer in my early 20’s – I was thrilled she was at dock for a portion of my recent visit to Freo. She is a a three-masted barquentine of 55 meters (~ 180 feet) displacing 344 tonnes with a mast height of 33 meters (~ 108 feet). Having been atop the mast underway I can assure you it is quite spectacular and ‘whippy’ up there! 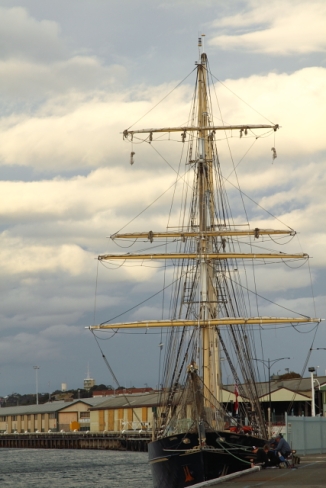 Transportation of a different variety – a Morris Minor as I recall – which is not indicative of the majority of automobiles in the area 😉
We call this one “Not CUBA” because that is precisely how it “felt” when we saw this scene. 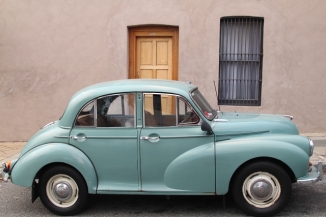 Whilst wandering around the amazing residential side-streets I came upon this doorway which had a particularly Indian (sub-continent) look to it – or at least that is how it struck me. I think this might well be my next book-mark for my paper books.

Still on the side-streets…

For this image I wanted to convey a soft and ethereal feel using the asparagus fern so I chose a wide-open aperture, elevated the camera and shot downwards so that only the top (nearest) frond would be in focus – I think it worked, but do you too?

These next four images, three of which are plant-centric, were captured as part of a self-assignment to capture patterns and texture.

I chose a large aperture (small opening) to ensure maximum depth-of-field as I needed the three-dimensional aspect to really capture what I saw. This image suggests Asia for me (the terraced gardens). How about you? 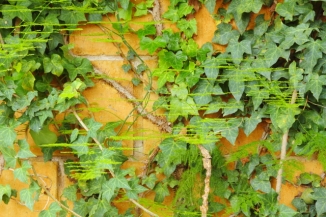 Morning light caresses a succulent from the garden of the home we were staying in. 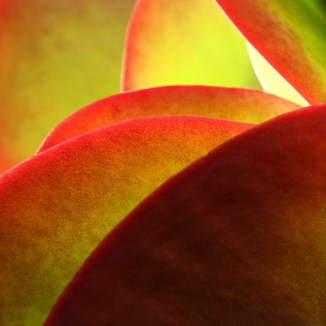 This street art/graffiti is by “REBOOT” – think about it… 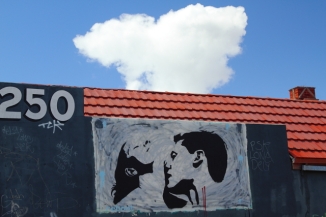 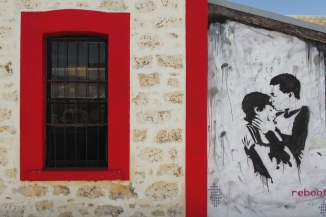 A mate of mine, Paul Waite (http://www.paulwaitephotography.com/#) – a phenomenal photographer based in Fremantle – took me to the abandoned (and VERY eerie) Fremantle Power Station for a light-painting shoot. Unfortunately access is prohibited so we couldn’t get inside and shoot the amazing ruined interior and all its rust, glass, and graffiti. However, it became an exercise in capturing the forbidden access to this huge old building and surrounds.

For this light-painting the building was already illuminated by some street lights over a rise to the right of frame, hence the two-toned building (I thought it was not only fortuitous how it matched the building’s horizontal lines, but also added an extra dimension to the “wierdness” that eminated from this place). I used a LED light to bring attention to the fence (the blue or ‘cool temperature’ of the LED lights adds to the cold metallic physical structure of the fence and razor-wire and the mental picture of its purpose)! 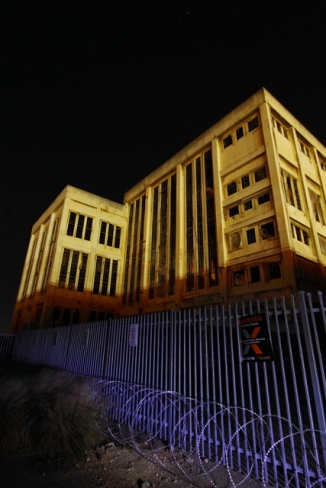 To close this particular photo-blog I have included three fireworks images from the Blessing of the Fleet ceremony conducted in The Fremantle Fishing Boat Harbour. Two of these images are 1 second exposures, the other is a 4 second exposure – based on effect I was seeking plus the bahavior/pattern of each particular firework. 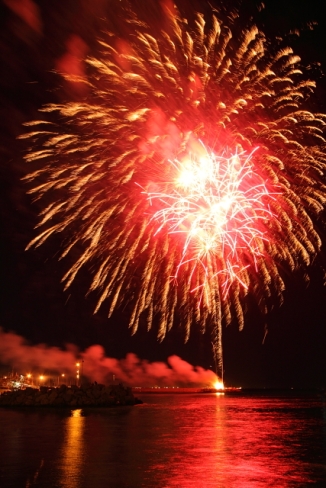